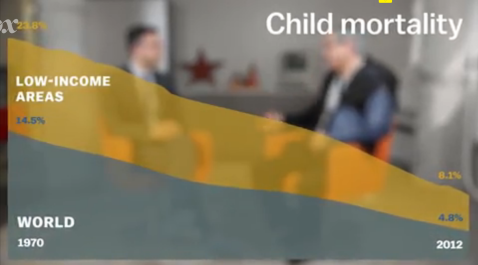 Author of “The Upside of Down,” Charles Kenny, talks to Ezra Klein about how the world is getting much, much better.

Ezra Klein: What have we made progress in that people don’t always recognize? Give me the optimistic view of the world over the last 50 years.

The number of kids who die before the age of five has halved worldwide in the last 20 years.

Pretty much the only place you can look at and see a negative trend is with some global environmental measures. The amount of carbon dioxide in the atmosphere going up and we all know what that’s been doing to the climate.

Ezra: These trends are to some degree obscured by one big measure that, in much of the world, isn’t budging: income in developing countries. How are all these things getting better if incomes in many of these countries aren’t going up?

Charles: Two big things are going on. One is a bunch of technologies have made a better quality of life cheaper. Think about vaccines, bed nets, and sugar-salt solutions that cure diarrhea. These things all save millions of lives a year. Add to that changing norms. It used to be a bit of nutty idea to send girls to school. Why would you want to do that? Now worldwide the norm is that of course girls should go to school.

Ezra: Are you a fan of efforts to try to measure global growth through less economic measures. One example I hear a lot about is the effort to create global happiness indicators.

Charles: Yes and no. I mean certainly income alone doesn’t capture everything we want to capture. But income really rocks. Living on a $1.25 a day is terrible. Income really matters and GDP is a really decent measure of income.

Happiness is another thing. You can sort of measure it. You can ask people how happy they are and it seems to certainly correlate with how often they smile and how happy their friends think they are. But one of the reasons I worry a bit about happiness for example is it’s true that a lot of really, really poor people living really sucky lives when you ask them are you happy they say yes. I don’t think that’s a reason not to worry about them. If they’re happy despite the fact that one of their kids has died, that’s not good enough for me, thank you very much. I want more than one measure of the quality of life because humans are complicated. There are lots of things that matter.

Ezra: What do you think are the ideas — even the simple ones — that have had the biggest, positive impact on people’s lives over the last 30 or 40 years?

Charles: The ones that have spread the most, I guess. It would be things like “I should get my kids vaccinated.” It’d be things like “I should get to vote for the person who runs my country.” These are really very simple ideas that have established themselves. I’d also say that the technology of the internal combustion engine has spread worldwide and has changed lives everywhere.

You can be in rural Africa and you’re quite likely still to be within 10 miles of an all-weather road which quite often will have a bus going along it periodically. That’s just revolutionary compared to 50 years ago. And then there’s the mobile phone. I used to believe, as a development professional, that this was a toy for rich people. I was very wrong. People voted with their wallets on that one. Even in developing countries, very poor people are willing to spend some of their very limited income on getting access to mobile phones.

Charles: Well imagine people in China have invented paper or fireworks. Would that be a bad thing for us or do we actually quite like having paper or fireworks? July the 4th would not be the same in this country if it were not for Chinese inventors. I think it’s just very clear — especially when it comes to innovation — a richer planet is a richer, healthier, happier one.

And in today’s world a richer China is just hugely tied in to the global economy. They are part of a whole bunch production chains that if tomorrow global trade broke down because of a war their economy would gum up over night. The United States in 1918 kind of could stand alone. It produced a lot of oil, it produced a lot of raw materials. It could build the tank from the ore in the ground. China can’t do that kind of thing nearly in the way we used to be able to in the United States. The world is just a different place when it comes to the threat of global war than I think than it used to be.

Ezra: When I read some of the American decline literature, the arguments often assume a very particular structure. The structure is America is declining and as such we need to rapidly implement the policies the author favors. It makes me wonder sometimes how much the American declinism is about the fear of the rising powers elsewhere versus trying to find — consciously or subconsciously — a galvanizing threat in the way that communism once was because various pundits, writers, politicians think that threat is needed to motivate people to embrace their agendas.

Charles: I think that we’re running out of “others” in a really positive way. We’re not allowed to discriminate against many people we used to discriminate against and so who are we going to have as the threat? Maybe what we’re left with is China. I hope we discover Martians because China is a really bad other. We really need to be cooperating with China. Treating them as a threat is going to be really counterproductive to our own quality of life.

This text has been edited for clarity and length.