If (cos(6πk/2000)-i cos(12πk/2000))e^(3πi/4) means nothing to you, then you’re probably like the rest of us. Normal.The last time “cos” resonated with you, was during high school math– when it meant “cosine,” a trigonometric function…of some sort. But to 25-year-old Iranian student Hamid Naderi Yeganeh, using cosines are a part of daily life — what you would expect of a mathematics major and award-winning mathlete.

Yeganeh’s A Bird in Flight was created by combing through tens of thousands of computer-generated images. This diagram shows the image evolving, as different numerical values are assigned to the formula.

What might be surprising however, is that Yeganeh’s formula, (cos(6πk/2000)-i cos(12πk/2000))e^(3πi/4), acts like his pen and ink. He uses formulas like these, combined with computer software programs to create fantastical and intricate mathematical artworks.

When different numerical values are assigned to the equation above, the end results can pictorially represent at bird in flight.

“The images (I make) are defined by basic mathematical concepts. At first, I use multiple formulas to create many different images. Then, I choose the best results,” Yeganeh explains.

Yeganeh began studying mathematics at the University of Qom in Iran in 2012. At the same time, he developed a love for art.

“At first I was interested in beautiful, symmetrical shapes. So, I started to create mathematical figures using trigonometric functions to define the endpoints of line segments. After a while, I understood I could find interesting shapes that looked like real life things, such as animals.”

Historical links between math and art

Math and art have long been linked. Artists in Ancient Greece used concepts such as ratio and symmetry, to sculpt the human form.

&lt;img alt=”This is an example of one of Yeganeh&amp;amp;#39;s tessellations, repeating two fractals. One is the shape of South America. Can you guess the other continent?” class=”media__image” src=”http://i2.cdn.turner.com/cnnnext/dam/assets/150914095342-hamid-math-art-2-large-169.jpg”&gt;

This is an example of one of Yeganeh’s tessellations, repeating two fractals. One is the shape of South America. Can you guess the other continent?

Leonardo Da Vinci’s work was also greatly influenced by mathematics. His Vitruvian Man, is an illustration based on the writings of Roman architect Vitruvius, sought to capture the exact proportions of the human body.

In his native Iran, Yeganeh points to Iranian tiling as a good example of the use of tessellations, or repeating patterns of polygons. He applies the same concept, in his own work.

Explorations have led to new animations

Yeganeh’s work with circles and line segments is expanding to include animations. Beyond that, he’s beginning to think in 3-D, creating sculptures made of fractals.

“The power of mathematics is unlimited. There’s an infinite number of great artworks that we can create,” he says. 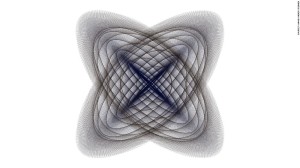 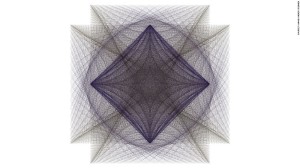 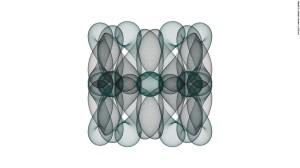 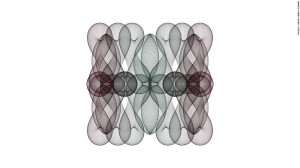 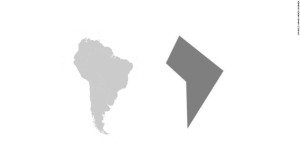