When Lucasfilm announced it was killing theStar Wars Expanded Universe, I was heartbroken. The galaxy George Lucas had dreamed up took form in the original movies, but it was populated and fully realized by the authors, artists, and video game developers that helped build Star Wars’ back stories. Now, like a blaster taken to my childhood memories, that Expanded Universe was gone. I thought the damage would be permanent.

But I’ve just seen the Star Wars: The Force Awakens trailer. I’ve seen it, and I want to go back to the galaxy far, far away right now. I don’t mind that Luke won’t ever meet Mara, I don’t mind that the Yuuzhan Vong are scrubbed from existence. I don’t even care that this is now a universe that will potentially never feature cybernetically advanced Ewok pilot Lieutenant Kettch. The trailer shows that the new movie still has the symbols of the soul ofStar Wars — X-Wings and TIE fighters and the Millennium Falcon thrown into frenetic aerial dog fights.

With The Force Awakens, Star Wars has something new for a galaxy that was all but mapped out across 35 years of filler material — it has mystery again.

Warning: I’ll be talking at length about the Expanded Universe lore and various film rumors, which might be considered spoilers.

Who is John Boyega’s unnamed character, springing from out of shot at the beginning of the 88-second teaser, and why is he wearing stormtrooper armor? Is he an Imperial deserter? Or has he pulled a Han Solo and borrowed a set of the iconic white coverings to pass as a member of the military? Script leaks have suggested the former, but that raises the question of his birth. Republic troops in Star Wars Episodes II and III were clones, fighting in the titular clone wars, but old Ben Kenobi’s reference to the conflict in Episode IV suggests that practice has changed, and new troopers are recruited from the populace. In the Expanded Universe, many of these recruits were trained on the high-gravity world of Carida, a planet destroyed some 11 years after the battle of Yavin by moody teenage jedi Kyp Durron. If Boyega’s character is one of these recruits, how did he end up on this desert planet that’s probably Tatooine? Are the troopers in the shuttle shown in the next shot chasing him?

But more importantly, how do stormtroopers still exist? The end of Return of the Jedishows — in addition to the bangingest Ewok dance party Endor’s ever seen — a montage of celebratory shots signaling the apparent end of the Empire. After the emperor’s death at the robot hands of angry daddy Darth Vader, are stormtroopers still Imperialstormtroopers? Have they been co-opted into a new government’s military structure? If so, why did they not change their super-evil hats? You’d think those would be the first things to go with a regime change. Perhaps some remnant of the Empire clings on, and that the Rebel Alliance’s victory in the Endor system was not as absolute as Wicket W. Warwick’s wild gyrations would have had us believe.

This question is compounded by the Rebel logo still plastered on the X-Wing pilots’ helmets. This could show that the Rebel Alliance is still a concern some 30 years after the destruction of the second Death Star, with battles to fight that require the deployment of starfighters — starfighters, it should be noted, that are three decades old. In the Expanded Universe, X-Wing manufacturer Incom planned to replace the venerable snubfighter with a new, more nimble E-Wing some six years after Endor. Why is the organization that unseated the Empire flying around in aging tin cans? And why can’t its pilots afford new helmets?

The 30-year gap between Episode VI and VII has at least advanced droid tech to the point that the newest astromech droids can roll around like cute little soccer balls (I’m placing a 10 dollar bet now that someone kicks one and it squawks like R2-D2), but the landspeeder shown some 38 seconds into the teaser looks decidedly low-tech. The speeder, driven byThe Force Awakens star Daisy Ridley, looks closer in appearance to a GNK “Gonk” power droid than Luke’s sleek X-34 model. According to rumors reported by SlashFilm, Ridley’s playing a Skywalker-esque figure called Kira, trapped on a desert planet and yearning for excitement and adventure. 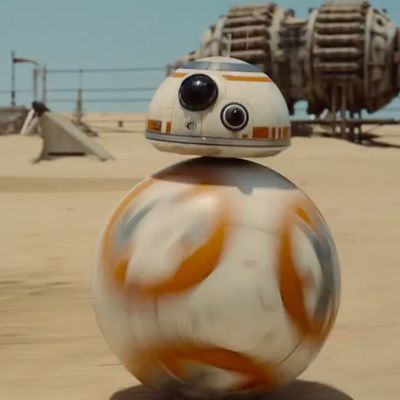 As for the gravelly voiceover that scores both Boyega and Ridley’s travels: I think it’s a safe bet that the owner is a Sith. Star Wars has conflicting ideas about the Sith — sometimes there can only be two at a time, sometimes entire communities of self-identified Sith wielding dark force powers, sometimes the word is used to refer to a race of red-faced humanoids that influenced the development of the dark side. But they share one characteristic: all Sith are considered to be Star Wars’ de facto baddies: corrupting and evil influences that the good guys need to redeem, or if that fails, kill.That’s presumably a Sith wielding a distinctive (and already much-mocked) lightsaber. The black robes and red saber color give the game away, but note also the length of the hilt. It’s long enough for the wielder to grip with two hands, giving them the powerful swinging style used by noted dark siders Darth Vader and Desann, the dinosaur-ish final boss of Jedi Knight II. Also consider the length of the man carrying it — the long limbs and notable stoop could show that this is actor Adam Driver, tipped to play the movie’s main villain. For now, the trailer Sith’s motives aren’t clear, but if he’s anything like every other Sith in (fake) history, he’ll either want to kill the movie’s heroes or turn them to the dark side.

That leaves the short teaser to close with something more instantly recognizable. As the Millennium Falcon veers into stomach-churning turns to escape from TIE fighters over the surface of the desert planet, look closely at the topside of its hull. The Falcon’s round radar dish, knocked off during the escape from the second Death Star, has been replaced by a rectangular model. A little nod to fans, no doubt, by a director who is certainly no stranger to fan service.

But this trailer also shows that Abrams is no stranger to Star Wars. Lucasfilm and Disney might have swept the old history away, sure, but in 88 short seconds, the director has injected excitement back into the void left by its removal. Star Wars is simple in tone, a Saturday matinee about titanic and easily sketched conflicts between light and dark. But it’s also about filling out this conflict, fleshing it out with strange planets, weird aliens, and characters caught up in the struggle. After watching this trailer, for the first time since the universe was destroyed, I can’t wait to get back to the galaxy far, far away.